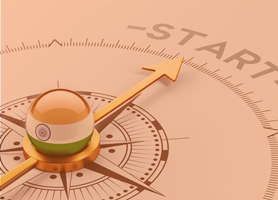 India juggernaut pushes forward: 2018 is the year India’s GDP overtakes France and UK in dollar terms. These are just the early tidings. Over the next decade, it would be a true juggernaut. The focus on education by every mother in India has been its secret weapon.

In 2018, I expect policy leaders to invest more in education. Currently, we are struggling at a poor 3 percent with an even poorer ability to implement in an incorruptible way. Yet, the Indian juggernaut moves on.

Startup, youth and innovation take centre stage: The shift in the youth mindset is tectonic. There was an era when going to a top university or getting a US green card was the biggest dream. This was as recently as 20 years ago. Today, the youth aspires to do its own thing. Many will succeed. Most will fail. But, as a nation and a society, we will be in a much better place where endeavour is celebrated more than entitlement.

2018 promises to make entrepreneurship a more central theme. NITI Aayog and the babus there are not the old era babus anymore. Everyone understands the importance of innovation and the power they hold to offer momentum to it.

NIRF-fired university action: 2018 promises to be a watershed year in the history of research and innovation by universities. One of the most under-celebrated successes of this nation is the implementation of NIRF (National Institutional Ranking Framework) that attaches weightage to the outcomes (rather than inputs) while ranking any university. Research outcomes and graduate outcomes make almost 60 percent of the ranking weightage.

Government policies linking attractive incentives to outcome-driven performance by universities is propelling the IITs, IIMs, central and state universities to wake up and run. This is going to be a huge enabler for India.

Politics will heat up: As we enter the second half of 2018, I expect significant realignments in alliances as well as policies. After the massive mandate, the inevitable pressure of “not done enough” will mount. The proverbial sacrificial lambs will happen. Token or real new heroes will get erected through reshuffles at the Centre. A bold move or two will be taken and projected in a big way. The opponents will, needless to say, latch on to every move with uber-critical view. We need to preserve our democracy and put the fear of performance in the minds of every politician regardless of his or her hue.

Sports and Bollywood more global: Will Julia Roberts and Richard Gere star in the next Baghbaan? Will Kohli & Co stay on top in the next 18 months of overseas tours? How will India’s Olympic preparations progress? Where will IPL’s market cap be? All of these, again, are manifestations of the coming of age of India. 2018 will push lots of these pieces forward with excitement and also bring in ample doses of disappointments. But the India narrative will gather more mass.

Conclusion: Lots of orbit changing successes are expected to come our way in diverse fields as we move forward. But, I expect you to build a healthy appetite for failures just as a sportsperson does.

While I hope, I don’t expect disruptive entrepreneurship policy to happen in 2018 or any big-bang policy changes. Will India abolish income tax? Will the Budget 2018 announce 6 percent on education spend? I dearly wish, though unlikely. It might be a continued case of incremental innovation than disruption in 2018. Let’s see.

Please note: The above article has been published on Business World, 4th January 2018.