Industry-Academia Link: a chasm, a broken link or a great opportunity?

The link between academia & industry is a broken one, not just in India but across the world. In fact, it never was built consciously in the first place, not even in the developed nations over the past many decades. Hugely inter-dependent and evolved sub-systems can surely be seen as in Boston/Massachusetts, California, Tel Aviv, Seoul, Tokyo, Beijing, Bengaluru, etc. However, those are mostly specific to an activity or two, such as innovation or start-up funding etc. These, in addition, have been cases of gradual evolution than an outcome-by-design.

Revisiting the academia-industry strengths:
Supply of young talent, nex-gen start-ups, cost-effective infra for research, development & training and high quality researchers are some of the riches that are available inside the academic institutions while the funds, demand for talent and innovation, cutting-edge knowledge relevant for new courses and an ability to commercialize knowledge are in abundance on the industry side.

Given these strong inter-dependencies, one would expect that a slew of collaborative activities such as student placements, industry internships, new course updation or launches, innovation collaboration, research funding, start-up conversations in a seamless and abundant manner, etc. However it does surprise why no one has been able to build a platform play for such a strong and potent opportunity. A bit of deeper thinking, conversations with stakeholders and on-ground observations throw up some interesting cause-effect debate.

The US reality and a chance for India:
Unlike in India, there is no real concept of campus placements in the US in that formal a way. Most of the heavy lifting is done by the students themselves with facilities and pointers available institutionally in various forms. Such a strong need or activity could have given birth to a start-up that could have gone on to scale it using technology over the past decades, much like other tech-giants of today.

Let me read the tea leaves and think aloud on what is likely to shape up in our own future! 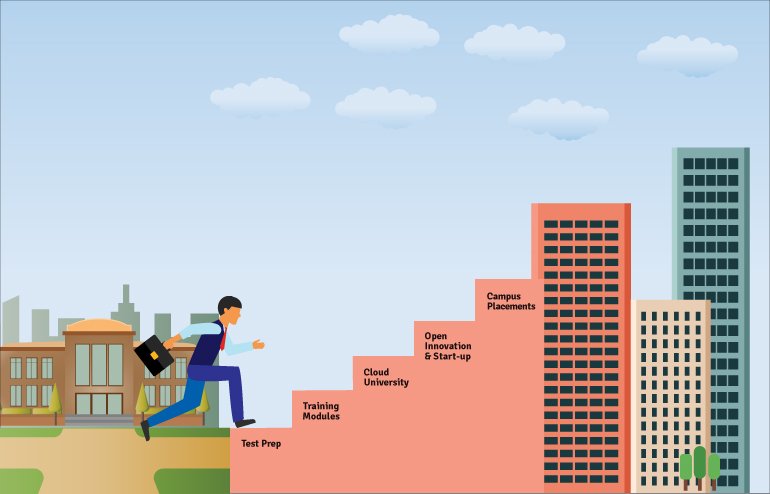 In such a context, adding booster training modules to help aspirants prepare for the tests is as critical as aspirants preparing for GATE, CAT, GMAT kind of programs. Training partnerships are beginning to emerge between assessments and training companies to make this happen.

The new world order in academia-industry collaboration will be aided by three other critical shifts over the next few years.

University on the Cloud:
The time has come. This is one place where the world is truly and undeniably flat. Indian, Chinese, Korean and American markets are all discovering this compelling need at the same time. Some others are well underway in their journey of discovery. Most will follow suit. The success of AWS and the waking up of all the tech-giants including Microsoft, IBM, Apple, Google etc. will make this a hotly pursued sector. During the process, Ux-SAAS becoming a reality is something I would punt on. Some exciting pilots are underway across the globe. Coursera, Udacity, Udemy, 361DM, ed-Cast, etc. are having a go at it in their own ways. A couple of them or who knows, even someone else, as yet unknown, will emerge a winner here.

Open innovation platform:
Democratised open innovation platforms that help students, researchers, founders, corporates etc. to collaborate seamlessly by staying in their respective places across the globe is the third disruptive movement whose time has come. WAIN-Connect, arguably, is the only platform doing this in a scaleable way with over 80,000 innovators, corporates, funders and mentors live today. Some parts of this effrt is being aided by initiatives such as start-up bootcamp (9 global locations), Y-combinator, TIE (The Indus Entrepreneurs) etc. But the end-to-end seamless tech-driven open collaboration is missing.

Campus Placements:
If one contrasts that with India, every higher education institution is measured hugely by her ability to deliver jobs as a part of her “campus placement” outcomes. The IITs, IIMs, NITs and other leading tech-institutes and b-schools lead this massive effort. Hence you also find some start-ups and other linked services such as e-litmus, co-cubes, aspiring minds, formistry, Tata-ion have taken birth over the past decade. Tata-ion is emerging as a compelling leader with the resources of TCS available to invest and scale. Ion NQT test has had over 280,000 test takers in 2018. That was about 150 percent higher than in 2017. Upon aggregation, if this number scales a million, it should surprise none of us.

If played right and across industry verticals, the branded NQT might become ubiquitous, not just in India but across countries around the globe. It could disrupt many micro-testing exercises that are sub-scale for many years now.

With a million jobs and more on offer in the IT and related sector alone and an equally large need from the other sectors such as auto, finance, consumer, infrastructure etc., India is likely to build out a world beating solution that will be a global highway between the institutions and the industry.

In sum, an integrated solution:
U-on-Cloud, Student skills training, placements and research/innovation collaboration are the four legs upon which the nex-gen higher education universities will be built over the coming decade. Over a hundred nations where the GER and university systems are fledgling will partner with a scaled-up movement such as this and leapfrog into the 21st century higher education architecture. This story will play out similar to the landline-mobile or bank-mBank generational change which played over the past decade at a blink-you-miss speed. Africa, Central Asia, Asia and Lat-Am will be the greatest beneficiaries from the game-changing innovation that is underway.

Stay cued in and watch the play.
Satya 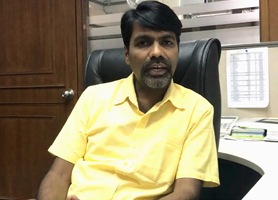